If we go to the right we can see Saint Barnabas Church which wa built in 1863 and which is in the middle of the village and in the middle of the mural, and behind the church is Pen-boyr Church in Wales Primary School which was opened in 1866. Then, we come to another gate inscribed with the word "Puw" which is the entrance to Parc Puw where the football team plays and the village children enjoy themselves in the play area. The two gates in the mural are symbolically important as the one closes and oppresses while the other opens and leads to a world of amusement through fun and play.

The other obvious circle is the Woollen Industry which runs from the middle to the right in the lower part of the mural with Johnny Lewis, the owner of the famous Cambrian Mills. This is the home of the National Wool Museum and he looks down over the mill roof and surveys the history of the prosperous woollen industry in the locality.

Behind him Cambrian Mills is on fire (1919) which is representative of many other mills that suffered the same fate for some unknown reason! Johnny Lewis was a strict but fair individual and he would reward hard work and revile laziness. He became very wealthy but he was a local benefactor and contributed most generously to establishing Parc Puw and the new Neuadd y Ddraig Goch. 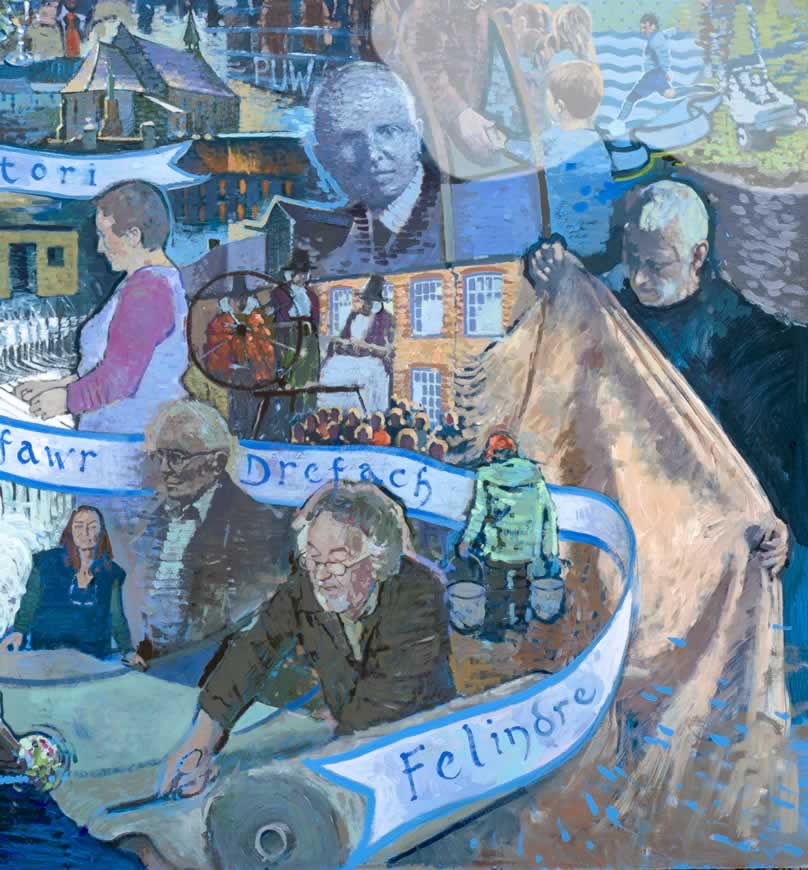 To the immediate right and holding a blanket is the late Keith Rees who outlined the history of the woollen industry to generations of visitors to the Museum. Despite his sad loss his anecdotes are forever green, such as the story about the man who was employed to go around the village buying people’s urine. Urine was an important element in the process of cloth fulling, so, a bucketful fetched a good price, but according to Keith urine from an abstainer’s house was worth twice as much as that fluid was purer. That accounts for the presence of the man in the green jacket carrying two buckets in front of Keith.

Continuing with this circle we see Raymond Jones cutting cloth with a scissors. He and his wife Diane are the owners of Melin Teifi which is opposite the main entrance to the Museum. Good quality shirts and jackets are made here today. They are both master craftspersons and their produce are sold all over the world.

Towy Cole Jones (Towy Cole) is between Raymond and Diane – a special character who throughout his life has supported fair play for his fellow workers and he is portrayed here with a determined look as he leads the workers out of the mill. Towy has detailed information about the woollen industry locally and he has an important collection of local photographs.

Above Towy is a woman who is symbolic of the ordinary workers of the woollen mills, and considering the strong socialist history of Dre-fach Felindre, it is fitting that this person – one of the ordinary people – is in the middle of the mural, while the gentleman’s residence at Llysnewydd is marginalised in the upper corner on the right hand side.

Meirion Jones the artist – has the last word, “Doing the work was quite a challenge – perhaps the most difficult thing I have done creatively – but as the pieces fell into place the experience became pleasureable, and I learnt very much from the experience about painting and about human nature. I also came to know the people of Dre-fach Felindre and became aware of their extremely varied and interesting history.”