Eifion Davies is in front of the team on the right holding the flag. He played for years for the club and he is still one of its mainstays. In front of him you can see Alan Campden pushing the field marking machine, another former player who has given a lifelong service to the club.

One of the most successful periods in the club’s history was at the end of the 1950s and the beginning of the 1960s. In 1957 and 1962 the club won three league cups for the first time in the history of the club and league. To commemorate that ‘golden age’ a reunion of former players was held on Saturday, 31st March 2012. In the photograph the Bargod under 10 years old team welcome the former players to Parc Puw to see Bargod playing against Dewi Stars. The row of former players are led by Defi John Jones (Defi John Velindre View) who is over 90 years old and followed by Peter Hughes Griffiths (brown coat), Einsleigh Harris, Dr Gareth Crompton (wearing a cap), John Newcombe (and his silver hair) and Adrian Edwards. Owain Thomas, the team captain on that day, is the player kicking the ball. 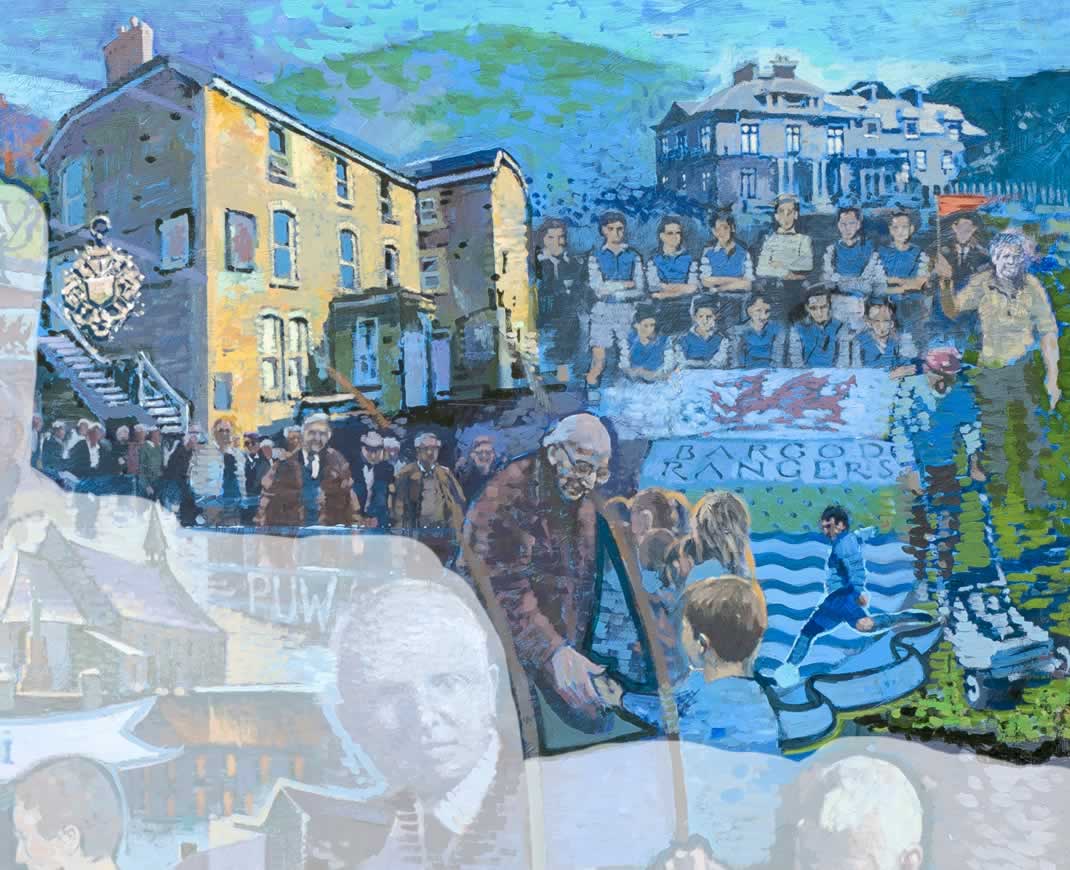 The building with the golden autumnal light shining on it to the left of the football team is Y Llew Coch/ Red Lion. This was the Bargod Rangers headquarters throughout the years and the teams used to change here before walking down to play on Llysnewydd meadow. Players and supporters go to the Red Lion to socialise after the games. In years gone by business people used to stay overnight in the Red Lion when they came to buy woollen goods in the mills.

The first Llysnewydd Mansion was built in 1795 as a home for the Lewes family. The mansion in the mural dates from 1910 and was designed by the famous architect, John Nash. It was destroyed by the owner in 1971 as it was in such a dilapidated state. The Lewes family played a prominent part in the history of the locality.

Moelfre: To the left of Llysnewydd Mansion we can see Moelfre Mountain, the highest point in Penboyr Parish. It is 1,100 feet above sea level and there are a number of stories and artefacts associated with the area dating back to the Iron Age and possibly even earlier. Village families used to go on an annual pilgrimage to the top of Moelfre and have a picnic in the open air. But that was not acceptable on a Sunday in a religious community and many a family were heavily criticised for doing so. Look at the aeroplane in the air moving towards the mountain. There was a historic incident in September 1944 when an aeroplane crashed on the top of Moelfre which attracted crowds of people for weeks to see its remains.