There’s a hint of another circle in the lower part of the mural beginning with the girls who have participated in the village Annual Carnival and who continue to do so in this popular event which has been held for very many years. These girls coming off the lorry are from the 2013 carnival. It seems as if they are walking towards us creating a third dimension.

To the left of the girls are three of the district’s characters – John Crossley – the carnival organiser in his typical patriotic shirt. Then Ken Howell, a warm and wise character who represents the district on Carmarthenshire County Council and Glanville Evans – known locally as Gos; he has given a lifetime of service to the district in a number of ways and especially to the Bargod Rangers football team and Llangeler Church. Gos died in 2014.

To the left of them is Danny Cole Jones (Danny Cole), the well known fisherman and one of the most witty characters the village has ever seen. Danny Cole’s stories are still alive locally. 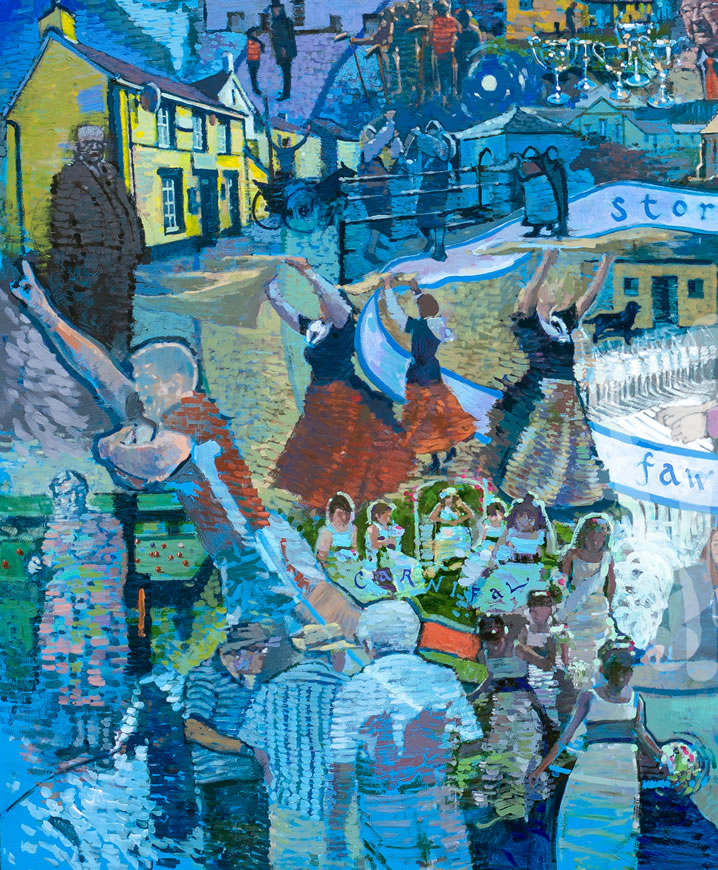 Then, standing above him is Marged Trefeca – Mrs Margaret Evans, Trefeca, Drefelin. She and her husband, Dai, were the caretakers of the old village hall which was on the opposite side of the road to the present hall. An important part of their responsibilities was looking after the snooker room with its three tables. Young and old would play snooker or billiards six evenings a week. Joe and Fred Davies and other British snooker and billiards champions would visit the hall annually to play against the local boys and hold exhibition matches. Look at the snooker table behind Marged and then at the old big stove which heated the place. ‘Sitting around the stove’ was very important socially as youngsters and men of all ages chatted and the older generation conveyed local folklore to the youngsters. And they in turn would relate these tales to the next generation.

It’s easy to spot the international rugby player Scott Williams who comes from Dre-fach, and what better image than Scott scoring his jubilant try at Twickenham in 2012.

Above Scott stands John Evans – John y Gwas. He was a very resourceful character and a former teacher at Aber-banc School - he was also the landlord of the New Shop Inn in the village. He was a county councillor for a long period, a concert compere, collector and local historian. He wrote a weekly column in the Carmarthen Journal over many years. In the mural he stands outside his tavern which is now known as Tafarn John y Gwas.

Completing this circle on entertainment are three dancing girls. Because of the social limitations of the time, especially regarding girls, they were not allowed to dance with the boys. The Sewing Room Girls usually danced with the woollen shirts after the factory shift finished. (Dawnswyr Talog girls modelled the dancing with woollen shirts for the mural).

Between the dancing girls and Pen-rhiw Chapel are Rebecca’s Daughters, men who dressed as girls to destroy the tollgate on Felindre Square on 15th June 1843. The place is called Sgwâr y Gât to this day. You can also see the ‘Pillbox’ which was situated on Sgwâr y Gât and built during the Second World War.

Many of these structures were built in the countryside where there was a crossroads so that our soldiers or our Home Guard could hide in them, if necessary, and shoot at the enemy. The black Labrador dog in front of the ‘pillbox’ is ‘Bob the Army’. Apparently the American soldiers who took over the woollen mills during the Second World War brought a dog with them. He became a great favourite with the locals; he was spoilt and fed until he was too fat to return to America after the war. He was adopted by the inhabitants of Dre-fach Felindre and was known as ‘Bob the Army’.

Above Rebecca’s Daughters you can see a man in a trap and pony raising his hands. This is the famous Reverend Evan Phillips, Newcastle Emlyn (1829 – 1912) on his way home after preaching in Clos-y-graig Chapel and he has just crossed the school bridge over the river Esgair before it was swept away by the flood. That famous flood was called Axa’s Flood and you can see the eye of the storm in the blue circle and the flowing flood water in the mural. The story goes that Axa went for a Sunday afternoon picnic on Moelfre rather than going to Sunday School in Soar Chapel. There was a great storm and the locals suspected that this was punishment for flouting the sanctity of the Sabbath, or perhaps it was the superstition of the age that prevailed!