Around 2010 Stephen Jones and Eifion Davies were researching information for inclusion on the Bargod Rangers Website. Gwynfor Jones, a life President of the club had stated that Bargod Rangers was formed in 1897 and that they were originally a hockey team. He offered no evidence, or supporting information, but was assured by information he had received from club members in the past.

In early 2011 Peter Hughes Griffiths another life President of the club was planning an event to celebrate the Clubs Golden Era when it won the League Cup, League Championship, and the Bay Cup in 1957, an achievement which was repeated in 1962.

On Easter Monday 2011 whilst attending the League Cup Final Stephen noticed a picture in the Black Lion Aberaeron commissioned for the Millennium celebrations 2000 showing various teams throughout the history of that club. Stephen was impressed and considered that we should do the same for Bargod Rangers. 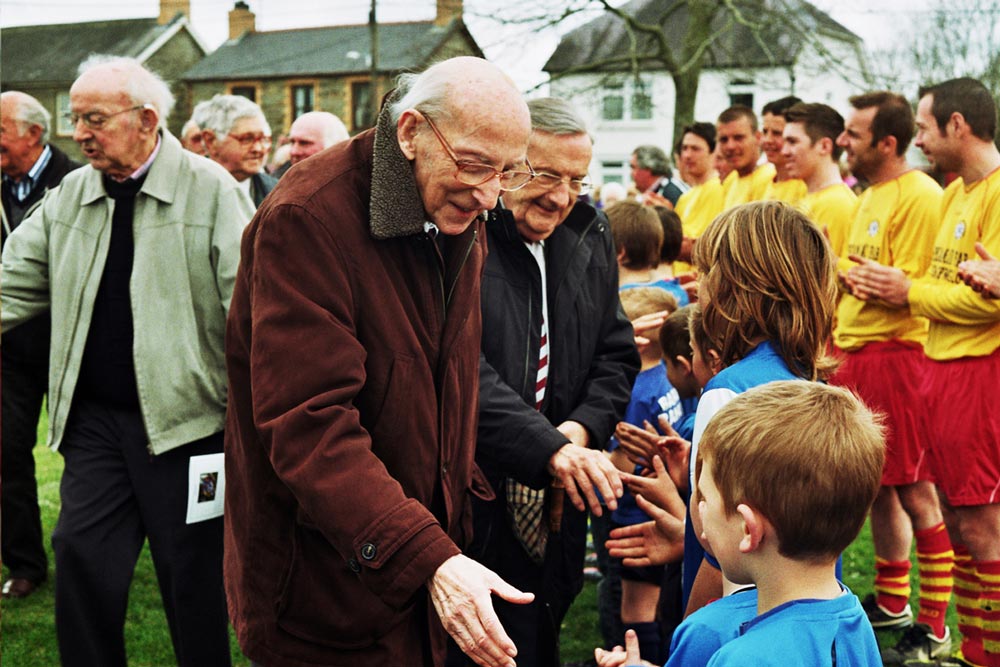 At the same time Richard Jones Goetre supplied an old picture of a hockey team with the name Bargod Rangers on a bag, which he estimated was taken in the 1890’s when Esau Evans of Goetre who was in the picture was around 25 years of age. This appeared to confirm Gwynfor’s assertion that Bargod Rangers was formed in 1897 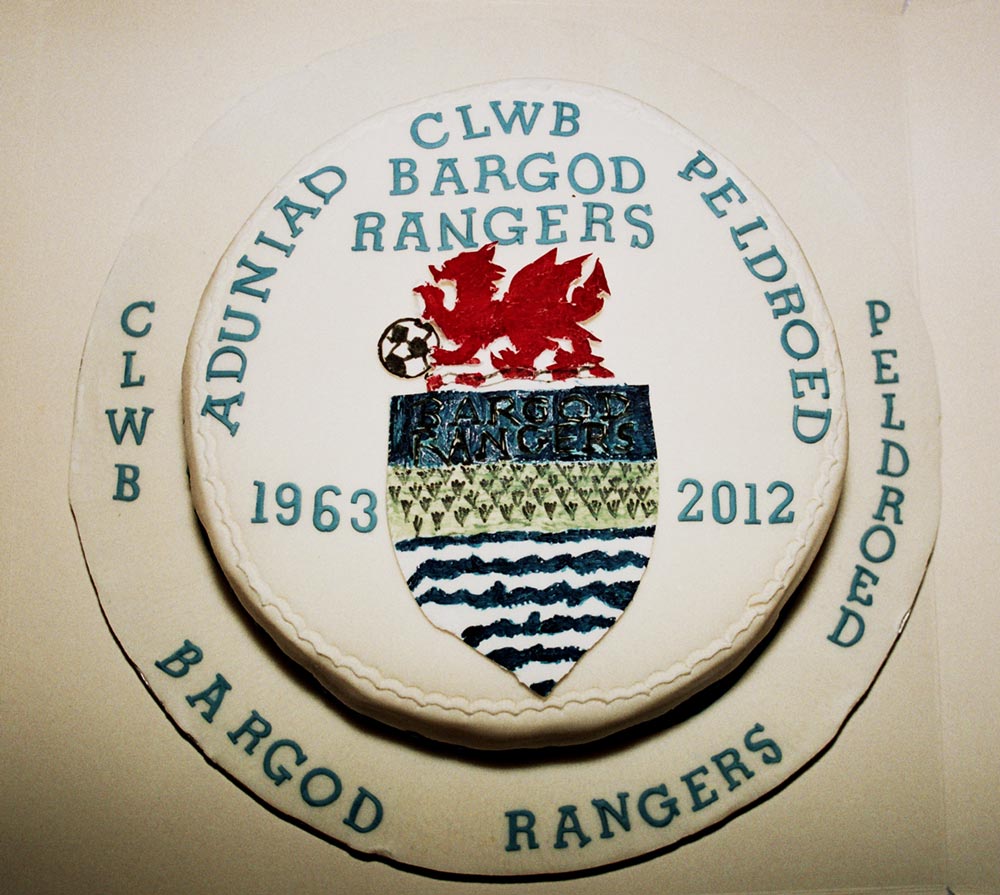 On the February 18th 2012, the Clubs reunion of the ‘Golden Era’ team was held where past players, and friends of the club were invited to join in the celebrations. The day was a resounding success, and raised a considerable sum of money. The Red Lion and Parc Puw were the focal points of the celebrations. Prior to the match against Dewi Stars, a historical display was set up at the Red Lion, illustrating the history of the club with a number of items supplied by past players being auctioned later in the evening. Amongst those who supplied items for the auction was John Davies, a former goal keeper for Bargod Rangers, and subsequently a professional soccer player with Cardiff and Hull City. Scott Williams a current Welsh International Rugby star, and a former player at the club presented a signed Rugby ball and John Hartson the former Celtic and Wales footballer, and who had family ties in the village presented a signed blue and white shirt with both Bargod and Celtic badges.

During the day older members of the club met for a buffet lunch at the Red Lion before the game against Dewi Stars, with other former players and friends assembling at Parc Puw Both teams together with members of Bargods Junior section formed a Guard of Honour as the older members entered Parc Puw following their lunch at the Red Lion. Following the match which Bargod won two goals to one, the fund raising auction was held with celebrations continuing well into the early hours. The day was exceptionally successful with in excess of seven thousand pounds being braised for club funds and the event was recorded on camera by Llyr Hampson Jones.

After the event Stephen pursued his vision of developing a historical mural of the Club similar to the picture he had seen at Aberaeron. In the autumn of 2012 Stephen met with Aled Jones of the National Library of Wales Aberystwyth who supplied match reports for the Tivy Side dating back to the 1880’s, together with other articles of interest about the social history of the locality and the football club. Aled was to prove invaluable in helping Bargod Rangers research its history for inclusion in ‘Stori Fawr Drefach Felindre’. Included in the match reports was a reference to the Hockey team of 1895 to 1899 which referred to Esau Evans of Goetre, and this report provided concrete evidence that the first ever team to play under the name Bargoed Rangers was a hockey team.

Armed with this new information, and the picture of the Hockey team, together with other historical materials which had been collected to date, Stephen approached Ann Whittall to see if the National Woolen Museum of Wales would be interested in the history of the football club by possibly arranging an exhibition as part of the localities’ social history. Ann showed considerable interest but suggested that the remit should be widened to include all aspects of the village’s social history including the choirs, snooker club, brass bands, education, agriculture, local archaeology, religious pursuits.

During the winter of 2012-13 a number of individuals with an interest in the history of the village were approached including Dr Leslie Baker Jones, and Towy Cole.

With interest now building in the proposed project, Stephen, and Eifion spoke to several organizations including Merched Y Wawr and the Red Dragon Hall committee to explain their proposal and to generate some interest amongst local people. Those discussions were generally helpful and fruitful with all organizations supporting the project

On the 20th of February 2013 the first meeting of the social history project was held at the Woollen Museum and a committee was formed with Stephen elected as chairman. The aims of phase 1 of the project was to:
1. Secure funding to deliver the project.
2. Collate and store all information collected to date at the Museum
3. To commission a painting of the Social History of Drefach Felindre.

Dr Leslie Baker-Jones was influential in providing a framework for information gathering, which included a number of key aspects which needed to be researched, as well as sign posting the direction of travel for the project.

On the 20th March 2013 a public meeting was held at the Red Dragon Hall which was well attended, at which the background of the project was explained using the Hockey picture, early Tivy Side reports and the Mural at Aberaeron to stimulate interest.

On Friday July 12th 2013, a Cheese and Wine evening was held for the purpose of updating people with the projects progress and to invite contributions from the public including pictures and artifacts. During the event the audience was informed of collaboration with The National Library of Wales to include scanned documents and photographs onto the ‘People’s Collection’ Website for which a Scanning Week was arranged for September. The Drefach Felindre History project was renamed Stori Fawr Drefach Felindre at the suggestion of Mrs Branwen Davies to emphasise the dynamic nature and wealth of history in this small community.

Following a successful scanning week, attention then focused on the development of the Mural depicting many aspects of the history of the village and surrounding area. This culminated with the unveiling of the painting in April 2014. During the unveiling evening the artist Meirion Jones drew to the attention of the audience that with such a wide remit it had been difficult to find an appropriate starting point for the picture, until he opened his e mail one day and saw what he called the ‘Iconic’ picture of an older gentleman shaking the hand of a young boy dressed in a football kit. He was later to learn that the older gentleman was David John Jones, the oldest member of the football club, leading the Reunion line from the Red Lion to Parc Puw, and handing over the Bargod Rangers baton to future generations.